Medicare Part D is another part of the Medicare Program and involves Prescription Drugs coverage. This specific part of Medicare is provided by Medicare-approved private companies. It is optional to enroll in Medicare Part D prescription drug coverage albeit if you decided to delay your enrollment you would face penalties that you need to pay, like with other Medicare parts, on top of your monthly premiums, though there are exceptions to these penalties depending on your situation. Thus it is better to enroll in Medicare Part D when you are first eligible. You don’t automatically enroll on this part of Medicare.

The private companies that are authorized to offer Part D follow certain standards and guidelines set forth by Medicare itself. You must first have Medicare in order to get prescription drug coverage. There are different plans under Medicare Part D and they often vary in coverage, formulary, and prices but are always within the standards set by Medicare. Each plan has different tiers of which in turn has different formularies. A formulary is the set of prescription drugs that are covered by your plan. The set of formularies in each tier may change anytime so be sure to always check with your provider. Your provider will send you a notice if there are changes in your formulary.

Medicare Part D prescription drug coverage can be availed stand-alone if you have Original Medicare or as a part of a plan that includes drug coverage through the Medicare Advantage Prescription Drug Plan. In joining a Medicare drug plan, you need to provide your Medicare Number and date when you began your Part A and/or Part B coverage. You can find this information on your Medicare card.

Medicare calculates the penalty by multiplying 1% of the "national base beneficiary premium" ($35.02 in 2018; $33.19 in 2019) times the number of full, uncovered months you didn't have Part D or creditable coverage. The monthly premium is rounded to the nearest $.10 and added to your monthly Part D premium. This late enrollment penalty amount changes annually.

Failure to get Part D due to postponement and trying to get it later will give you a late enrollment penalty which you will have to pay on top of your Part D premium for a lifetime as long as you’re enrolled in Medicare Part D even if you switch to another Medicare drug plan. 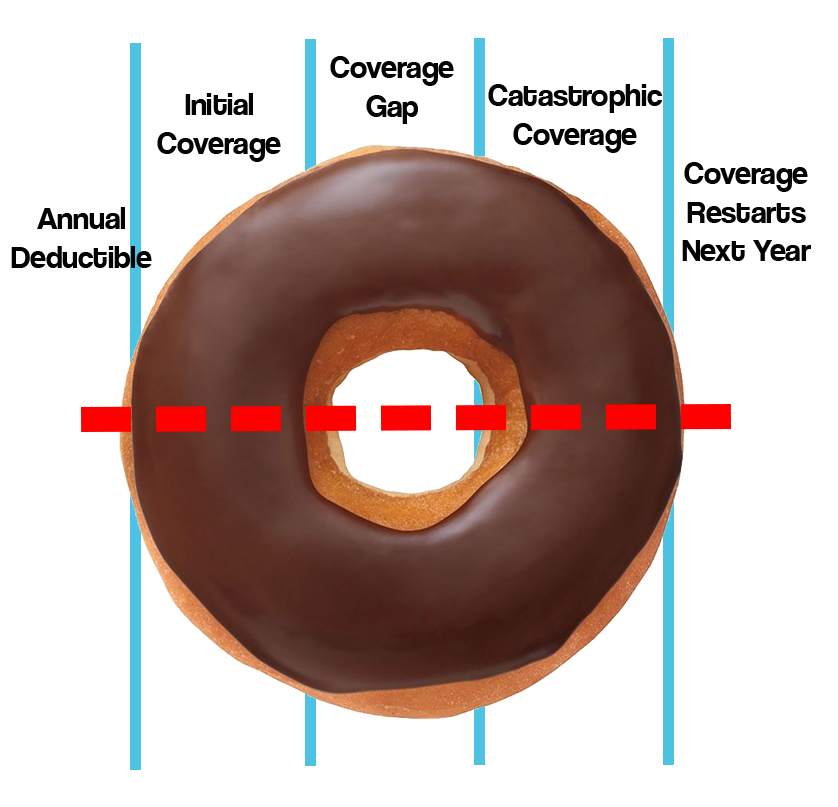 Under the first phase which is the deductible phase, you have to shoulder the full amount of your medication costs until you reach the yearly deductible of your chosen plan if it has one. After that, Medicare Part D will cover its share of what remains of your drug expenses.

The initial coverage phase starts after you reach your deductible, if your plan doesn’t have one, your coverage will begin here rather than the deductible phase. This is where you will pay for your cost share for covered medications which will depend on the percentage of your coinsurance. What you’ll pay here will come out of your pocket. This phase has a limit depending on your plan and may change annually.

When you and your plan reaches $4,020 (the limit as of 2020) in combination for what you’ve spent in the year you are now inside the coverage gap or also known as the “donut hole”. Here you’ll have to pay about 35% of the plan’s costs with brand-name drug prescription and 44% with generic drugs all out of your pocket.

Once your out-of-pocket cost has reached $6350 you will be in the catastrophic coverage phase. For the remaining part of the year, you only have to pay a small coinsurance or co-payment for covered prescription drugs.

Bear in mind that all these figures change annually and depend on the Part D Plan that you have. You need to be aware of these changes in order to not be caught unaware of all the money you have to spend yourself aside from your premiums.

Medicare Part D enrollees will pay 25% of the cost of all their prescription drugs from the time they enter the gap until they reach catastrophic coverage.